The fifth and current Constitution of the State of Arkansas, framed and adopted by the convention which assembled at Little Rock, July 14th, 1874, and ratified by the people of the state, at the election held Oct. 13th, 1874.

Conservatives accused Republicans of political corruption, and the Conservatives' power grew. The 1872 election proved to be a political nightmare for the Republicans. Governor Powell Clayton moved to the U.S. Senate in 1871, and by the time of the election of 1872, the Arkansas Republicans split into two factions. Elisha Baxter led one faction, known as the Minstrels. The other group, called the Brindletails, supported Joseph Brooks. Voter fraud and intimidation ran rampant at the election, but after two months of certifying results, the state election commission declared Baxter the winner. Brooks challenged the vote, but Baxter took office in January of 1873.

Baxter attempted to reconcile the Republicans and Conservatives, and as a result, began to lose support within his Republican party. Alternatively, during the campaign Brooks promised to restore voting rights and give amnesty to former Confederates, but later somewhat altered his thinking on the issue. As a result, Baxter's supporters turned to Brooks, and Brooks' supporters aligned with Baxter.

Brooks won a court decision and along with a group of armed men, physically removed Baxter from the State House on April 15, 1874. Fighting erupted on the streets of Little Rock with both men claiming the governorship. The incident and resulting skirmishing became known as the Brooks-Baxter War.

Finally, after several weeks' delay, President Ulysses S. Grant gave Baxter his support and asked Brooks' men to disband. Baxter returned to the State House, and in May 1874, the legislature called for a June 30 election to decide whether to hold a constitutional convention. A landslide victory in favor of drafting a new constitution paved the way for the formation of a new Arkansas government.

The Constitutional Convention assembled at the State House on July 14, 1874. Republicans who had supported Elisha Baxter and Conservative Democrats joined together in efforts to positively change laws implemented with the 1868 Constitution. Grandison Royston of Hempstead County was elected chairman of the convention, and was the only delegate who had also been a member of the 1836 convention. In his acceptance speech, Royston called for a constitution providing for a government under which "the people shall be the source of power." After two months of deliberations, the new constitution was completed. The voters of Arkansas ratified the document in an October 13, 1874, election.

The 1874 Constitution attempted to limit the power of state government. New laws restricted what government could do. Some refer to the document as the "Thou shalt not" constitution because many provisions are written in the negative. In financial matters for example, "Neither the State nor any city, county, town, or other municipality in this State shall ever loan its credit for any purpose whatever." The constitution gave Arkansas citizens more control over public officials by reducing terms from four years to two and increasing the number of officials subject to election. Substantially weakened by many of the provisions, the governor's office became largely an honorary position until the twentieth century. The new constitution also tried to curtail corruption, largely in reaction to Reconstruction-era spending. The huge debt incurred in the years after the Civil War made financial issues extremely important. Salaries of state officials were fixed and had to be approved by the General Assembly. The number of offices was reduced to improve efficiency and reduce costs. And, taxes became more uniform throughout the state.

Enactment of the 1874 Constitution marked the end of Reconstruction in Arkansas. The document still governs the state today. 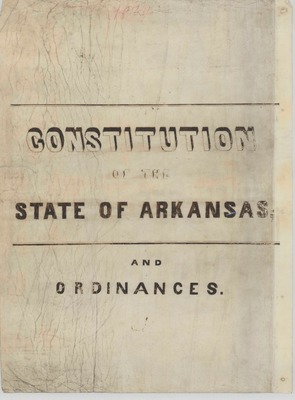