The 1864 Constitution reflects few changes from the 1836 document. The new constitution's provisions varied from previous laws by calling for the popular election of the secretary of state, state auditor, state treasurer, and judges. New regulations abolished slavery, but failed to define the rights of former slaves.

Following the occupation of Little Rock by Union troops in September of 1863, Governor Harris Flanagin moved the Confederate state capitol to Washington, in Hempstead County. Sentiment remained divided throughout the state: many in northwestern Arkansas supported the Union, while those to the south and in the Delta region continued to stand behind the Confederacy.

As the war drew to an end, President Abraham Lincoln became eager to re-establish governments loyal to the Union in the South. For a state government to be recognized and therefore receive financial support from the federal government, ten percent of 1860 voters had to complete an Oath of Allegiance to the United States. A move to form an Arkansas government sympathetic to the Union emerged in the state's northern counties.

Twenty-four counties elected delegates to a constitutional convention, and forty-five delegates met in Little Rock. During the convention's second week, a new constitution was drafted by a committee of thirteen delegates within a twenty-four-hour period. On January 19, 1864, members of the convention adopted the new document. In an election supervised by federal military officials, the constitution was ratified on March 14, 1864. Isaac Murphy was elected governor, and new legislators were chosen. Even though President Abraham Lincoln approved the Arkansas constitution, it was never recognized by the United States Congress. 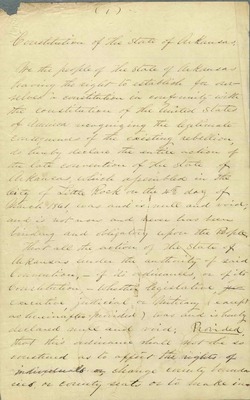