Western Union telegram sent from Brigadier General H. King White, Little Rock to Colonel T.C. Flournoy, Pine Bluff on May 10, 1874 during the Brooks-Baxter War in Arkansas. White informs Flournoy of his arrival in Little Rock. He also notes the impending meeting of the legislature and a skirmish in which the Brooks faction attempted to use the captured steamboat Hallie. 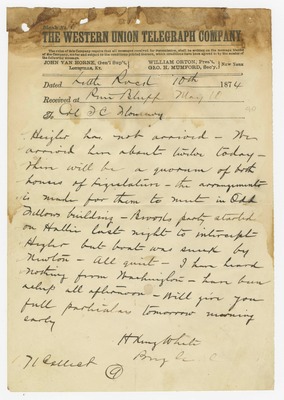