William Leon Russell (1914-2000) served in World War II and the Korean War. He ranks as the Arkansas National Guard soldier to receive the most Purple Hearts. He was awarded what amounts to eight Purple Hearts, represented by Purple Hearts from combat operations at the Aleutian Islands of Attu and Adack and the Battle of the Bulge in Germany, and a silver oak leaf cluster (representing five wounds) and two bronze oak leaf clusters (representing two additional wounds) from other combatives on the Western Front.

He was awarded a football scholarship and attended Arkansas State Teachers College, during which time he was appointed 1940 team captain and selected for the 1940 All-State (NAIC) team. His national guard unit was mobilized on December 23, 1940 and was posted to the Aleutian Islands for combat operations. In 1943, Russell went to Camp Croft, South Carolina, where he met and married Gladys Opal English. They married on December 24, 1943 at Fort Benning, Georgia.

In July 1944 Russell was sent to France. While on the Western Front, he received eight notable wounds, seven of which count toward his Purple Hearts. Russell was medically evacuated to the United States where he went through rehabilitation and was honorably discharged on February 11, 1946. He was elected sheriff of Ozark, Franklin County, Arkansas, in 1946, and reelected in 1948.

In August 1950 Russell was mobilized for the Korean War, where he served six months prior to returning to Arkansas for the anticipated death of his father. Russell attended other military training programs and served post assignments throughout the United States and in Greece. He retired from the military on June 30, 1965. In the 1970s he went to work as a tax agent for the Arkansas Department of Finance and Administration in Fayetteville, Washington County, Arkansas. He retired from that job in 1986.

Russell died on October 9, 2000 in Fayetteville, Arkansas, and is buried at the Fayetteville National Cemetery. He was posthumously inducted into the Arkansas Military Veterans' Hall of Fame in 2011.

The inside pages of select booklets and loose newspapers noted below have not been scanned.

ASA_MS000825_Russell_William_scrapbook_047 – “KOS the Motherland of Hippocrates” booklet interior not scanned

Loose newspapers not digitized, but available in microfilm newspaper.

This collection contains additional loose ephemera not currently included with this item online.

An undated OV photograph depicting a large group of soldiers in uniform is included as a supplemental item. 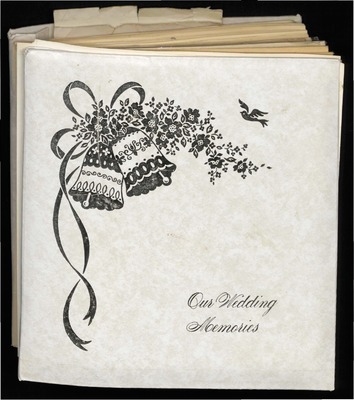