This handwritten document ceded the Quapaw reservation on the Arkansas River to the United States in return for land among the Caddo on the Red River in northwestern Louisiana, $4,000 in goods, and a $2,000 annual annuity for eleven years.

In 1818, the Quapaw Native American tribe agreed to a treaty with the United States government that would cede to them a reservation of one million acres running northeast to southwest between the Arkansas and Ouachita rivers. In this treaty, the Quapaw relinquished their claims to thirty million acres south of the Arkansas River in exchange for $4,000 in goods and an annual payment of $1,000 worth of goods. White settlers and territorial officials, however, coveted the valuable land along the Arkansas River, and tensions between them and the Quapaw ran high.

Only six years later, the Quapaw signed the Treaty of 1824, and ceded their reservation to the United States in return for land among the Caddo on the Red River in northwestern Louisiana, $4,000 in goods, and a $2,000 annual annuity for eleven years. This treaty would lead the Quapaw to disaster in Louisiana, as flooding destroyed crops and led to many deaths from starvation.

Lack of response and the promised goods and the annuity from the United States undermined the Quapaw’s confidence in the federal government’s agents. After six months in Louisiana, one-fourth of the Quapaw nation moved back to the land on the Arkansas River. Many Quapaw became squatters on land near Pine Bluff, Arkansas, and began to use the annuity to lay the foundation for a Quapaw future in Arkansas, paying for farming implements and education. By 1830, all of the Quapaw had returned to Arkansas, but many of them were eventually pushed off their farms by white settlers, and tensions mounted yet again. With their situation becoming more desperate, the Quapaw signed the Treaty of 1833 by which they agreed to move to 96,000 acres of land in the northeastern corner of the Indian Territory. Today, most of the Quapaw Nation resides in northeastern Oklahoma with the tribal headquarters in Quapaw, Oklahoma.

Quapaw Treaty: Articles of a Treaty between the United States and the Quapaw Nation of Indians, 1824 November 15, Arkansas State Archives, Little Rock, Arkansas. 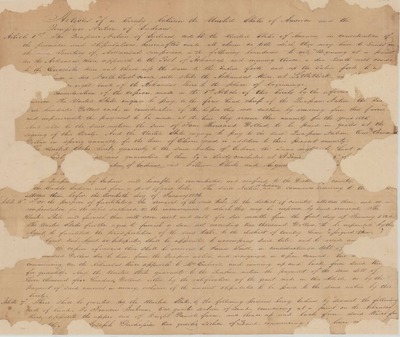