George W. Paschal made notes in this letterbook while living and practicing law in Van Buren, Arkansas. This letterbook offers a glimpse of life in the region just a few years after Arkansas became a state.

George Washington Paschal was born in 1812, in Skull Shoals, Greene County, Georgia. He was admitted to the bar in 1832, and soon after married Sarah Ridge, the daughter of the Cherokee chief, John Ridge. In 1837, he moved to Van Buren, Arkansas, where he practiced law. He was appointed Associate Justice of the Arkansas Supreme Court in 1842. Paschal moved to Texas around 1848, where he continued to practice law. He was a staunch Union supporter, which caused him to face animosity from many of his fellow Texans during the Civil War. In 1869, he moved to Washington, District of Columbia, where he remained until his death in 1878. 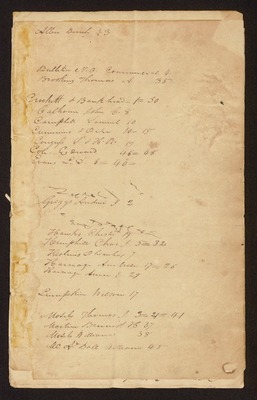