Geological Map of the Chalk Region of Southwestern Arkansas

This map shows the geological makeup of the Chalk Region of southwestern Arkansas.

During the Paleozoic Era, all of the area that is now Arkansas lay under the ocean. The central and southern areas were under a deeper part of the ocean than the northern part, and so had less marine life but more sand and clay. The remains of marine organisms eventually became limestone, sand became sandstone, silt turned into siltstone, and clay became shale. In the Mesozoic Era, which the Cretaceous Period is part of, southern Arkansas was still underneath the ocean, but the ocean had become shallow. The remains of marine organisms from this period formed chalk, marl, and calcareous clay. Studying the geology of the state helps us understand the forces that have shaped Arkansas over its long history. 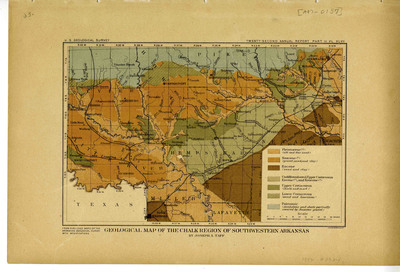