Two Maps of Boone County (Side 2)

In 1833, Carroll County was formed, with what is now Boone County was mostly inside it. Boone County itself was created by the Arkansas State Legislature in Act LXX of 1869, out of land from Carroll County, with land from Marion County being added in 1875. The Arkansas Gazette for April 9, 1869, stated that the county was named after Daniel Boone, but Senator Hopper said in a letter that the beautiful scenery of the region suggested the name Boon, and the first newspaper printed in the new county was named the Boon County Advocate. Whichever namesake was meant, the official legislation named the county Boone.

In the beginning days of the county, the county seat was a point of contention. Local Republicans wanted Harrison to be the county seat, and former Confederates wanted to move the county seat to Bellefonte. Bellefonte had been a pro-Confederate community during the Civil War, and Harrison had only been recently founded by former Union soldiers and carpetbaggers. Harrison was even called Carpetbaggers town. After a public vote, the county seat remained in Harrison. Outlaws of the time often went to the Arkansas Ozarks, and Jesse James, Frank James, Jim Young, and Cole Young are known to have gone to Boone County several times. In the early 1900s, the Missouri and North Arkansas Railroad was built through northern Arkansas, providing easier movement of people and goods in and out of Boone County. 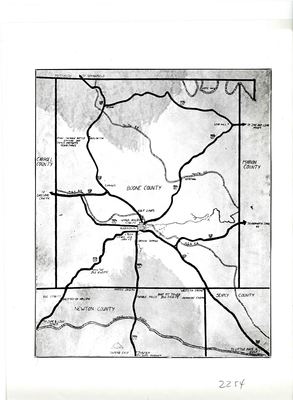