Map of the Survey of the Crater of Diamonds, 1960

This plat shows a survey of the Crater of Diamonds produced for Mr. and Mrs. Howard A. Millar in June of 1960. The location of fences, bed rails, pipes, and concrete markers are especially noted. There is also an explanation from Joe B. Wilson, the civil engineer who surveyed the property and made the plat, for why certain concrete markers are located too far to the north.

The first attempt to use the diamond-bearing fields outside of Murfreesboro as a tourist attraction came in 1949 on land owned by the Millar family. The attraction was opened in 1951 and named the Diamond Preserve of the United States. The name was later changed to Crater of Diamonds. The adjacent property had passed through various owners and was in the hands of Mrs. Ethel Wilkinson of Logansport, Indiana, at the time. She opened her property to the public as The Big Mine, and a fierce battle of the billboards began. During this time, both Wilkinson and the Millars competed fiercely with one another by posting billboards. Both properties were purchased in 1969 by Dallas company General Earth Minerals, which operated the area as a private tourist attraction, and in 1972 the State of Arkansas bought it to convert it into a state park. 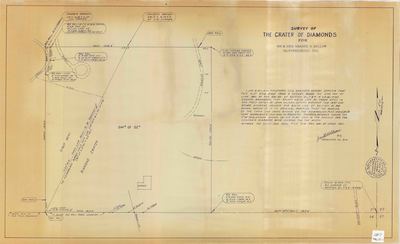