This map shows the location of diamond mines, prospects, residential areas, and waterways in the area surrounding Murfreesboro in Pike County.

John Wesley Huddleston was the first to find diamonds at his farm near Murfreesboro in August, 1906. The source, the Prairie Creek diamondiferous kimberlite pipe, is the pipe of an ancient, extinct volcano, and was formed almost 100 million years ago. Huddlestonâ€™s discovery soon sparked a diamond rush. The area was expected to contain commercial-grade diamonds, but the expectations of the prospectors were proven to be too high. Most of the speculation ended by 1909. Mining continued unsuccessfully until 1932, when the Great Depression ended it. In 1943 and 1944, the U.S. Bureau of Mines evaluated the area and found few diamonds. In 1948 and 1950, the Diamond Corporation of America conducted their own test and found even fewer diamonds.

The area was used for private tourist attractions from 1951 to 1969, when General Earth Minerals, a company from Dallas, Texas, bought the properties containing the diamond fields and consolidated them into one private tourist attraction. In 1972, the State of Arkansas bought the land to be developed into a state park, and named it Crater of Diamonds State Park. Although diamond mining in Arkansas proved to be a commercial failure, the winner of the 1913 statewide contest to design the state flag included a white rhombus diamond because of the discovery of diamonds in Arkansas. The diamond remains in the state flag today, and Arkansas remains the only U.S. state that produces diamonds. The Crater of Diamonds State Park is the only diamond-producing site in the world open to the public, and park policy is "finders keepers." 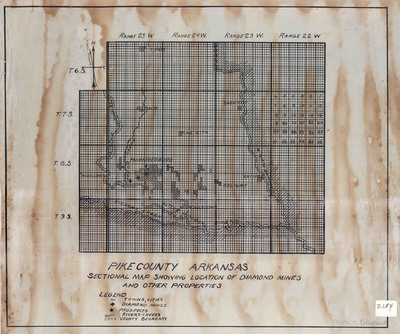