This map shows troop movements of and the engagements between Union and Confederate forces in the weeks leading up to the Battle of Pea Ridge, also known as the Battle of Elkhorn Tavern.

After the Confederate victory at the Battle of Wilsons Creek in Missouri on August 10, 1861, Union Major General Henry W. Halleck chose Brigadier General Samuel Ryan Curtis to lead the men who had fought at Wilsons Creek and drive the Confederates out of southwestern Missouri. Confederate President Jefferson Davis chose Major General Earl Van Dorn to command the Confederate forces in the trans-Mississippi area and take back Missouri. By late February 1862, the Confederates had been pushed to the Arkansas-Missouri border, and Major General Sterling Prices troops had been driven all the way into Arkansas. On February 17th, a skirmish took place at Pott's Hill near James Dunagins farm. Fresh Confederate troops from Brigadier General McCulloch's command, lead by Colonel Louis HÃpert, marched North from the Confederate cantonment at Cross Hollows to assist Price. Their plan was to delay the Federal troops long enough for Price to be able to reach Cross Hollows.

The two sides exchanged fire, and after HÃ©bert delayed Curtis enough, he withdrew and joined Priceâ€™s column. Price met Brigadier General McCulloch at Cross Hollows, and they continued deeper into Arkansas. After the skirmish, Curtis didn't continue pursuing Price, but camped in the Little Sugar Creek valley. Local Unionists told him about the existence of the Confederate cantonment at Cross Hollows, and he decided to try to attack the rebel cantonment from the West. Brigadier General Alexander Asboth's troops were sent to Bentonville for reconnaissance. Asboth reported that the land West of the rebel camp was clear. On the 20th of February, the Confederates reached Fayetteville. Fayetteville was a major supply depot, and the Confederates couldn't bring all the supplies with them on their retreat, so McCulloch ordered his men to take what supplies they could carry, and ordered the rest of the supplies be destroyed. Buildings were set ablaze to accomplish this, including buildings containing ammunition. The ensuing explosions destroyed several city blocks.

The Confederates continued south until they reached Telegraph Road near Stricklers Station in the Boston Mountains. Union Brigadier General Curtis soon learned that Cross Hollows and Fayetteville had been abandoned by the Confederates. Since he knew he was outnumbered and running out of supplies, he decided to hold his position. He sent out raids, the largest of which was a reconnaissance mission commanded by Asboth to Fayetteville from February 22nd to 26th. Asboth occupied Fayetteville from the 23rd to the 26th, and the Unionist citizens were grateful for his presence. Curtis recalled Asboths force from Fayetteville because it was too close to the Confederate forces and because he thought there wouldn't be enough supplies for them there. Curtis divided his army to gather forage, and occupied Cross Hollows with two American divisions. Brigadier General Franz Sigel went along McKissicks Creek with the two German divisions under his leadership. On February 25th, a mounted force of about 500 men under Major Lawrence Sullivan Sul Ross from the 6th Texas Cavalry surprised Union Captain Montgomery at Keetsville, killing two federal soldiers and taking 60 to 70 horses.

The Battle of Pea Ridge would take place the following month, on March 6th and 7th, 1862. Though the Confederate forces outnumbered its Union counterparts, the Union victory at Pea Ridge would cement Union control of Missouri and northern Arkansas for the duration of the war. 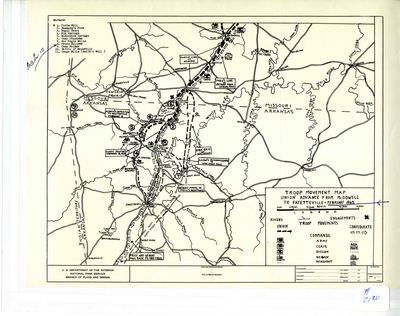