Sounding is the act of measuring the depth of a body of water at different points for navigation purposes. Traditional terms for soundings are a source for common expressions in the English language, notably "deep six" (a sounding of 6 fathoms). On the Mississippi River in the 1800s, the leadsmen doing the soundings also used old-fashioned words for some of the numbers; for example, instead of "two" they would say "twain". Thus when the depth was two fathoms, they would call "by the mark twain!". The American writer Mark Twain, a former river pilot, likely took his pen name from this cry.

Pine Bluff is located in Jefferson County in Southeast Arkansas and was incorporated January 10, 1839. It was named for a bluff of pine trees overlooking the south bank of the Arkansas River. 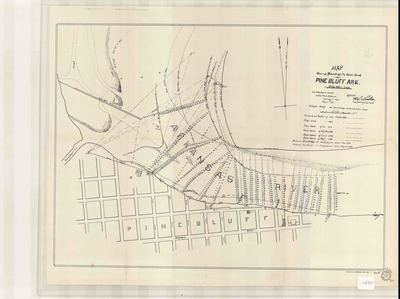