Printed color map of Arkansas showing railroad routes across the state. There is a black and white image of the state capitol building and a smaller state map showing the Congressional districts in the lower right corner of the map.

In 1899, acting pursuant to an amendment to Ark. Const. Art. 17, Section 10, the Arkansas legislature created the Arkansas Railroad Commission. Though relating only to railroads and express companies, the act creating the Railroad Commission charged it with the duty to ensure that rates were just and reasonable, and to respond to complaints from the public about rates.

In 1933, the Arkansas Corporation Commission was reestablished. The Commission was vested with the powers of several other commissions which were abolished, including the Railroad Commission. 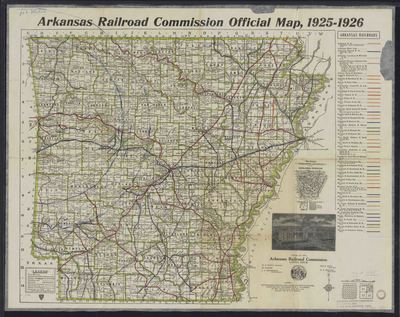