Black and white printed highway and transportation map of Polk County, Arkansas. The legend is in the upper right corner. The map shows roads and highways, highway bridges, railroads and railroad stations, towns and boundaries, cemeteries, farm units and dwellings, businesses, hotels, churches, schools, factories, sawmills, camps and lodges. Revisions were made to the map in 1939.

Located in the southwest corner of the state, Polk County was established in 1844. Its parent county is Sevier County, and the county seat is Mena. 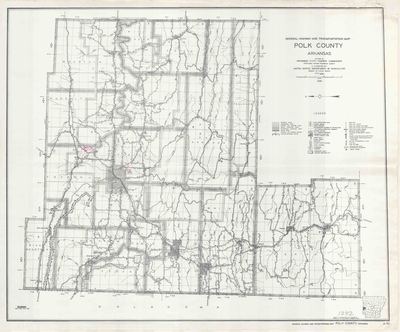