Article from the Arkansas Democrat about problems with press censorship in the 1917 Espionage Bill.

THE FIGHT FOR A FREE PRESS
Following an earnest fight by leading newspapers of the
country against the stringent press censorship provision of the
espionage bill, the House of Representatives Friday by an over-
whelming vote struck out the undemocratic section and sub-
stituted therefor a milder provision.
The new section of the bill takes away from unscrupulous
politicians the dictatorial power which the first provision granted.
Under the new amendment introduced and adopted Friday,
criticism of the government is permissible and publication of
information of use to the enemy is to be made punishable after
conviction by a jury. That is as it should be. If any man does a treasonable act
he should be punished for it. However, he should not be sub-
jected to the punishment by a sort of military courtmartial, but
should have a trial by jury guaranteed by the constitution, and
his accusers should be made to probe that his act was a treason-
able one. This is the principle effected in the new section of
the bill.
The espionage bill as it stood before its amendment Friday
was even more stringent than the one in force in Germany and
England. It was so sever that even a leading English magazine
cartooned the situation, showing "Uncle Sam" with a bandage
over his eyes, the bandage being labeled "Espionage Bill." Beside
him were an incompetent army officer and an incompetent naval
officer, who -- pointing at the bandaged Uncle Sam -- remarked
that they could do as they pleased now and no one could say
anything.
It was a fight for freedom that the leading newspapers made
and they have won the fight in the house.
Those of you who telegraphed your senators and congress-
men to vote against the censorhsip provision are also to be con-
gratulated for your share in the victory. Keep in touch with
them and see that they continue their fight for freedom of the
press and freedom of speech. 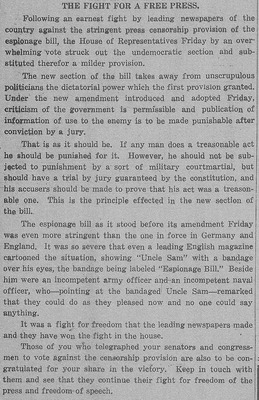