Article from the Arkansas Gazette about how the government cracked down on labor groups for their anti-war activities.

[Page 1] TO STOP ANTI-
WAR ACTIVITIES
Headquarters of I.W.W.
Raided and All Docu-
ments Seized
WASHINGTON ACTS
Order for Raids and Seizures
is Nation-Wide, and Af-
fects All Branches
NO FORMAL CHARGE MADE
INVESTIGATING HERE
"Apparently those I.W.W. mem-
bers are being arrested as a means
of obtaining evidence," said W.
H. Rector, assistant United States
district attorney for the Eastern
District of Arkansas last night
after reading the dispatches tell-
ing of the wholesale arrests. Mr.
Recotr said that investigators
from his department have been
sent to northern parts of the state
to investigate activities of the
Working Class Union. "This or-
ganization is something like the I.
W.W., only worse," he said. It
seems to have some strength in Ar-
kansas, while the I.W.W. has lit-
tle following in this state so far
as I have been able to learn."
Washington, Sept. 5 -- the govern-
ment today took drastic measures to
end the anti-war propaganda and ac-
tivities conducted in the name of the
Industrial Workers of the World, the
Socialist party and other organi-
zations throughout the United States.
On orders from Attorney General
Gregory, United States marshals in
many cities and towns descended at 2
p.m., Central time, upon local head-
quarters of the Industrial Workers of
the World, seized books, checks, cor-
respondence and other documents, and
in some instances arrested officials
found upon the premises.
In Chicago federal agents took pos-
session of the national headquarters
of the Socialist party and a warrant
authorizing the seizure of its docu-
ments was served upon its lawyer.
[Page 2] Documents Seized
the seizure of documents was in
accordance with a plan perfected here
by William C. Fitts, assistant attor-
ney general. A statement issued by
the department announced that the
seizure of papers was made in connec-
tion with a federal Grand Jury inves-
tigation of the I.W.W. now proceed-
ing in Chicago. The department's ac-
tion was taken on the eve of a report
to President Wilson by Chief Justice
Covington of the Supreme Court of
the District of columbia, designated
recently by the president to investi-
gate the labor situation in the West.
Judge Covington has completed his
investigation and probably will report
to President Wilson tomorrow.
Whether the concerted action of
marshals throughout the country was
related to Judge Covington's investi-
gation was not disclosed. Judge Cov-
ington has made a special study of
the activities of the Industrial Work-
ers of the World. It was shortly aft-
er he reached the Northwest that 27
leaders of the organization were ar-
rested by Idaho National Guardsmen
the day before the time set for a
general strike in Washington, Ore-
gon, Montana and Idaho.
Charges Not Given Out
The charges against leaders of the
organization under arrest or whose
arrest is contemplated were not made
public here. It was said at the De-
partment of Justice that these would
have to be determined by the Grand
Jury investigating the organization.
For many weeks past the activi-
ties of the Industrial Workers of the
World leaders have been under close
scrutiny. Scores of field workers,
chiefly in the West and Middle West,
have devoted their attention to al-
leged attempts by leaders to embar-
rass the government in the conduct of
the war by strikes and other disturb-
ances called in the name of labor.
Activities Political
These activities never have been
regarded here as a labor movement.
they have been declared to be politi-
cal and in some instances conducted
with a view solely to hinder the gov-
ernment in carrying on the war.
Recently it was charged that in-
cluded in the ranks of the Industrial
Workers of the World were many
Austrians who have been active in
stirring up strife intended to hamper
American industries, doing work han-
dled by Germans before the United
States entered the war. Investigation
has failed, it is said, to connect these
activities with German money.
Suspicious Circumstances
Local United States attorneys have
reported many instances of a suspi-
cious nature in connection with al-
leged labor troubles, however, and
these have been investigated.
Documents seized today will be
submitted to the Grand Juries. Pros-
ecution may be begun under several
laws, chiefly the espionage act, cov-
ering the utterance of treasonable
and seditious statments and the food
control law. Prosecution under the
labor law could be conducted in in-
stances where it was shown that at-
tempts were being made to impede
the interstate movement of food-
stuffs and other commodities con-
trolled by the government and need-
ed for the successful prosecution of
the war. 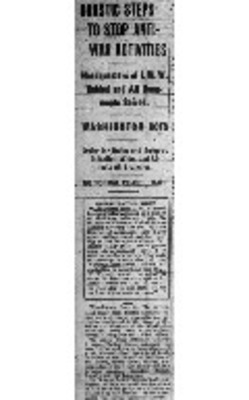