Letter between George Izard and the Secretary of War

Letter between George Izard and the Secretary of War regarding negotiations with the Cherokees.

[Page 1] To the Secy at War.
Little Rock,
June 18, 1825
Sir,
Major E.W. Duval, the Cherokee
agent passed through this place, a
week ago, and delivered to me your
letter of the 16th April. Conformably
with your instructions, I will open
a negotiation with the Cherokees
residing within this Territory. From
what I can learn however, it seems
improbable that these Indians will
accept the first proposal mentioned
by you of removing entirely beyond
the limits of Arkansas. Their object
is to exchange the lands they now
occupy for those lying South + West
of them and immediately adjoining
the former. Even this will be very
advantageous to the inhabitants
of Arkansas & Missouri, as it will
open a direct communication between
the settlements on White River, &
those on the Arkansas & Red Rivers.
From the part of the country to be ceded
to the Choctaws I have not heard
since my last of the 6th inst. In a
few days I expect precise information
from
[Page 2] from that quarter.
The protracted absence of the Secretary
of this Territory leaves me in the dark
respecting the measures adopted by him
before my arrival. There are here,
in the hands of the gentleman who
has charge of his papers, bills on New
Orleans, drawn by the Treasurer of
the United States, payable to the order
of R. Crittenden Esq. acting governor
for $10,500, which of course cannot
be negotiated. These funds are I
presume intended to meet the an-
nuities and other payments which
are or will soon be due to the Indian
tribes. As accident may prevent Mr.
Crittenden from returning hither
before this money shall be required,
it would perhaps be advisable to
forward this amount in similar
bills payable to my order, which will
be sent back if the others shall be
negotiated before their arrival.
There is also a sum in specie lodged
at Mr. Wm Montgomery's at
the mouth of White River, of
which
[Page 3] which I received the first intimation
from Major Duval. He stated that
this money was to be delivered to my
order, and that it was destined for
the Cherokees of his agency. I directed
him to send a sub agent (whom he
recommended for the purpose) from
his residence at Dardanelles to me.
This person I will authorise to take
charge of the specie in question, of
which I however know not the amount.
It has been, I understand, for several
months, at its present place of deposit.
I am at present engaged in organizing
the Militia of this Territory; nothing
had been done on this important
subject, except commissioning a
number of officers. The Brig. Gen.
resides at Cantonment Touson,
where he holds the office of Sutler
to the Garrison. The Adgt. Genl is
Sheriff for the County of Arkansas,
and lives about 100 miles from this
place. I have ordered both these
officers to report to me, and have in-
structed the former in relation to
the measures I have thought
proper
[Page 4] proper to take. It is very desirable
that arms & ammunition should
be trasmitted to the Territ. before winter.
There are some boxes of both depo-
sited at a warehouse here --
respecting these as well as a number
of other circumstances connected
with my duties, the absence of the
Secretary and the want of official
documents leave me uninformed.
The arrival of the Choctaw, the
removal of the Quapaws, and
the excitement among the Citi-
zens who are ordered away from
their settlements west of the
new Choctaw line, render pre-
paration for defense or coercion
indispensable. In my opinion the
establishment of an arsenal with a
competent detachment of ordinance
officers at or near this town, would
be highly advantageous to the public
interest.
I am 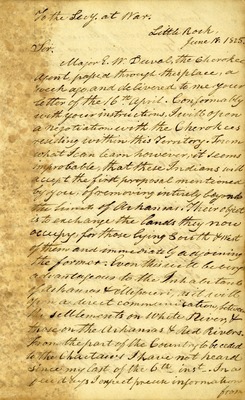