Letter from A. Arbuckle to Cantonment Gibson

Letter from A. Arbuckle to Cantonment Gibson regarding recent conflicts between the Cherokee and Osages.

[Page 1] Head Quarters of Infantry
Cantonment Gibson
15th Jany 1826
Sir
I have the honor to report that a Mr. Leggit who arrived
at this post from Cantonment Towson on the 11th Inst.
informed me that when on Red River, he was advised by
Genl Bradford that a party of Indians composed of
Cherokees, Delawares, and some of another tribe perhaps Shawnees,
had lately killed five Osage warriors on or near the
Red River. This with other information received
scarcley admits a doubt of the Osage having been killed
and by a party composed of the Tribes referred to
The Osages missing belonged to Clermores band, he with
some of his chiefs were here on the 12th Inst. they remarked
that they were confident five of their men had been killed
as they went in the direction of the Cherokee and Delware
hunters, and it is long since they outght to have returned
to their friends. The chief, and those with him, assured
me that their band would remain quiet and depend on the
interposition of our government for redress.
I have
[Page 2] written to the Cherokee agent request them to keep me
advised of their movements and if possible, to restrain them
from further aggression untill measures can be taken
to settle their difficulties with the Osages, in a friendly manner.
There is reason to believe that it is the intention of
the Cherokees, Delawares and other tribes on White River
to go to war against the Osages in the spring. This
would unavoidably impair the security of our citizens
on the frontier, and probably lead to very unpleasant
consequences. I have written to the superintendant of
Indian affairs at St. Louis and advised him of the neces-
sity of measures being immediately takes to preserve
peace between the Tribes in the Quarter.
I have the honor to be
sir
To his excellency
gov Geo Izard
Little Rock
Arkansas
Very respectfully
your obe serv
A. Arbuckle 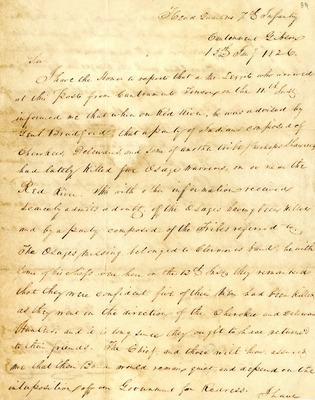