[Page 1] Department of War,
18th March 1825
To His Excellency
Gov Izard -
Sir,
I have the honor to enclose herewith a copy of
the 1st Article of the Treaty entered into with the Choctaws
for a running of a permanent boundary line, and the removal
of such Citizens as may be ascertained to be settled on the
west side of it. James S. Conway, Esq, has been
appointed surveyor, and the necessary instructions have
been transmitted to him for his government. To you
is committed the execution of so much of the article as
relates to a removal of the Citizens, from the west to
the east side of the line which Mr. Conway has been
appointed to run.
As the Citizens to be removed will have pitched
their crops before it will be possible to commence the work
of their removal, you are particularly instructed to extend
to them a sufficient time to enable them to gather
them. But no indulgence beyond that period will be
granted. The obligation of the Treaty must be carried into
full and complete effect; and this reaches, as you will
see, to a prevention of future settlements being made
on the west of the line, as well as to the breaking up
of those already made.
Orders
[Page 2] Orders will issue to the officer in command of can-
tonment Gibson to cooperate with you, should it be necessary,
both in the removal, and in preventing settlements from begin
made west of the line, in future.
I have the honor [illegible]
very respectfully
yr. Obt. Sr.
James Barbour
[Page 3] Copy
Article 1st. - The Choctaw Nation do hereby cede to the
United States all that portion of the land ceded to them by
the second article fo the Treaty of Doak Stand, as aforesaid, lying
east of a line beginning on the Arkansas, one hundred paces
east of Fort Smith, and running thence, due south, to Red
River: it being understood that the line shall constitute
and remain, the permanent boundary between the United States
and the Choctaws; and the United States agreeing to remove
such citizens as may be settled on the west side, to the south
side of said line, and prevent future settlements from being
made on the west thereof. 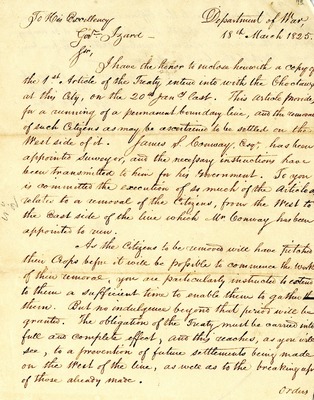