Black and white sketch of Archibald Yell, including biographical narrative.

The hero of Buena Vista

Born in North Carolina 1797, Archibald Yell emigrated to Tennessee in early youth.. Here he met General Andrew Jackson.. As boy captain of the Jackson guards Yell led his men in the campaign against the Creeks… He was a volunteer in the Battle of New orleans.. In 1818 he served under Jackson in the Seminole War... Practiced law in Fayetteville, Tenn..

When Jackson became president, he named Yell judge in Arkansas... He located in Fayetteville. Elected first congressman from state of Arkansas. Became governor 1840. Resigned seat in congress 1844 to volunteer for the Mexican War... He was killed in the Battle of Buena Vista, Feb. 22, 1847... 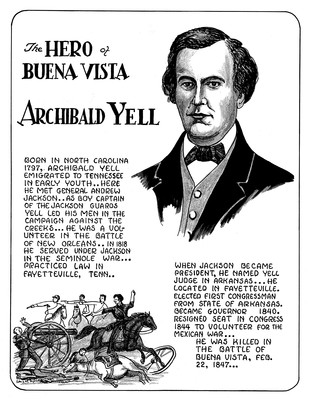