Black and white sketch of Samuel Williams, including biographical narrative.

Samuel W. Williams was born 1828 in South Carolina. The family came to Washington. Ark., in 1842.. Moved to farm near where Lonoke now is..

Samuel Wright Williams was admitted to the bar 1851… Appointed attorney-general 1855 by Governor Conway... Member of the military board 1861 that raised and equipped an army and turned it over to Gen. Hardee, representing the Confederate Govt.... Same Williams then recruited the 17th Ark. Infantry.

Became prosecuting attorney and in 1876 was elected state senator from Pulaski and Perry Counties...Advocate of railroad system of state since 1850 and was long attorney and director for several lines... Supported Gov. Baxter in Brooks-Baxter War 1874.. Served many times as special judge on both circuit and supreme bench.. He died March 14, 1900, at Little Rock. 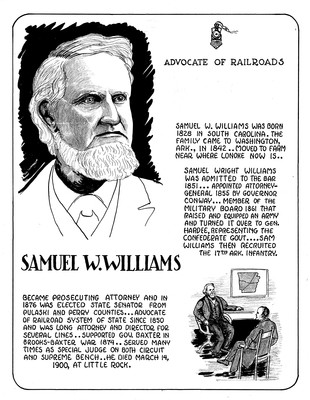