Founder of the first settlement

De Tonti who founded the first white settlement in the Arkansas wilderness was an Italian by birth.. While serving in the French Army in Sicily, he lost a hand.. He wore an iron hook in place of the hand and became known as "The man with the iron hand.".. De Tonti accompanied La Salle when the latter sailed from France in 1678..

In 1682 La Salle and De Tonti, with 23 Frenchmen and 18 Indians, made their famous journey down the Mississippi and took possession of the country in the name of the king of France.. In 1686 De Tonti made another journey to the mouth of the Mississippi.. Returning up the river he gave six of his men permission to settle on the Arkansas River.. The post of Arkansas was established in 1686.... De Tonti sepnt the remainder of his life exploring the Louisiana Territory.. He died at Mobile in 1704... 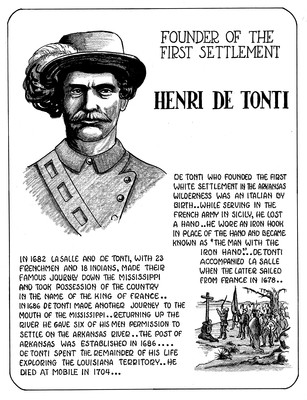