Black and white sketch of J.N. Smithee, including biographical narrative.

James N. Smithee was born in 1842 in Lawrence County… Worked as type-setter on newspapers in Pine Bluff, Des Arc and Powhatan before he was 15.. Bought interest in Brownsville Echo.

Smithee enlisted in the Confederate Army, Woodruff's Light Artillery, 1861. Wounded in Battle of Helena 1863... Was adjutant of Blocher's Battalion at close of the war.

In 1874 Smithee was appointed commissioner of immigration and state lands... he joined the staff of the Arkansas Gazette.. Later became editor of Little Rock Star and stayed with it after its consolidation with the Democrat... In 1896 Smithee bought control of the Gazette and was its editor until 1899... Was unsuccessful candidate for Democratic nomination for governor 1880.. Lived in Colorado and New Mexico several years but returned to Arkansas when he purchased the Gazette.. he died July 4, 1902 in Little Rock.. 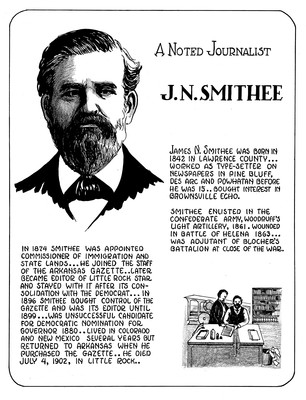