Black and white sketch of Sequoyah, including biographical narrative.

Inventor of an alphabet

Little is known about the parentage and early life of the man who gave his people an alphabet.. Born about 1760 in the Cherokee Nation, Georgia, and during his childhood lived alone with his mother at Tuskegee Town, Tenn.... The boy never attended school and never attended school and never learned the English language.. Sequoyah was a hunter, trapper, and also skilled in silver working. Injured while hunting and made a cripple for life.. Often visited the Moravian mission and was impressed with the advantages of civilization.. For 12 years he worked on a sylabary of the Cherokee language compsed of 85 characters which the Cherokees adopted in writing their language.. Sequoyah came with his people to Arkansas and assisted in reorganizing the Cherokeenation after migration of 1838...

In 1843 while searching for a band of lost Cherokees in the western mountains, Sequoyah died and was buried in Mexico.. A pension of $300 voted him by his nation during his life time was continued to his widow, the only literary pension the U.S... Mt. Sequoyah at Fayetteville and the Sequoia trees of California are named after him.. His English name was George Gist, or Guess.. 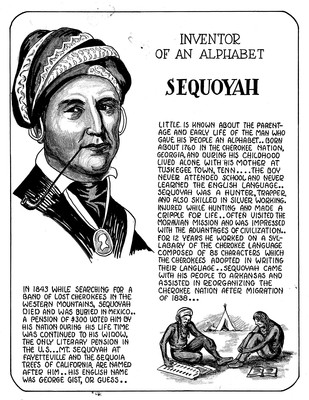