Black and white sketch of Andrew Scott, including biographical narrative.

The small but mighty judge

Small of stature, blonde with sharp features and long hair, Andrew Scott has been called "The greatest judge on the superior court bench from 1819 to 1827" He was born 1788 in Virginia his parents moving to Missouri when he was ten years old.. On the creation of Arkansas Territory in 1819 Pres. Monroe appointed Scott one of the three judges of the superior court, who with Robt. Crittenden formed the first legislature.. The other two judges quit and for two years the first superior court of Arkansas was made up solely and alone "of that man who never flinched from duty- Judge Andrew Scott."

Judge Scott killed Judge Robt. Selden in a duel 1824 and this duel prevented the senate's confirmation of Scott's appointment for a third term.. He was named judge of first circuit court.. Retired to his plantation in Pope County 1831.. Was elected to the legislature and to the constitutional convention of 1836. Married a daughter of Judge John Rice of Missouri... Andrew Rice died at Scotia in March 1859. 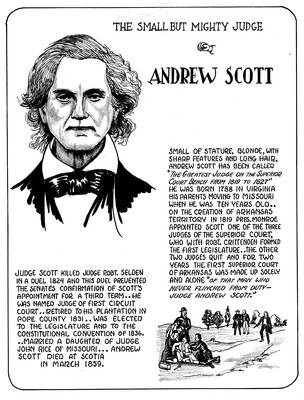