Born 1845 in North Carolina.. When he was seven years old his parents moved to Mississippi where he was educated…. He enlisted at the age of 16 in the Confederate Army… Studied law and was admitted to the bar in 1868.... He located at Fort Smith.

Elected circuit judge 1877 and in 1882 elected to congress.. Was re-elected three times.. Succeeded the noted Isaac parker as U.S. district judge in 1896.. Remained on the bench until his death, April 17, 1911.. He gained a national reputation through his controversies with the speaker of the house, T.B. Reed.. Was successful in gaining military reservation at Ft. Smith for the public schools of that city. 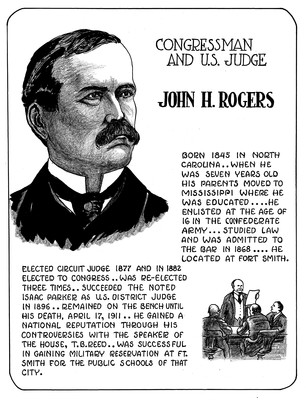