Leader of the senate

Joseph Taylor Robinson was born 1872 on a farm in Lonoke County.. Studied in the University of Arkansas and graduated from University of Virginia law department.. Began practice of law at Lonoke..

Elected permanent chairman of Democratic National Convention 1928 at Houston, Texas... Nominated for vice-president of the United States on first ballot..... In November 1929 he was appointed by President Hoover as member of American delegation to the London Naval Limitation Conference in 1930.. 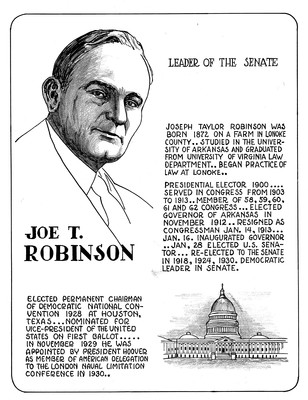