John Selden Roane was born 1817 in Wilson County, Tennessee. Settled at Pine Bluff 1837 and later lived in Van Buren for a while… Elected to general assembly… Served as Lieut-colonel of Yell's regiment in Mexican War, taking command after Yell's death in Battle of Buena Vista... Roane fought duel with Albert Pike because of latter's criticism of conduct of Arkansas troops... Roane died at Pine Bluff April 8, 1867.

Roane was elected governor in 1849 and served until 1852. During his administration occurred the California Gold Rush and the Everett- Tutt feud in Marion County which was put down by the militia.

Raised troops for the Confederacy and was appoointed brigadier-general march 20, 1862... When Van Dorn took his army across the Mississippi leaving Arkansas almost defenseless, Roane was assigned to command in Arkansas. Took active part in battle of Prairie Grove... 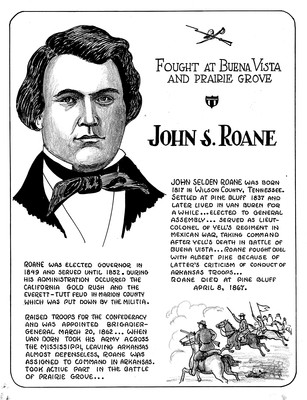