Black and white sketch of James Miller, including biographical narrative.

The first governor of Arkansas Territory was James Miller the hero of Lundy's Lane… In that battle the commanding officer asked Miller if he could take a British battery on a height overlooking the field.. "I'll try sir," Miller replied, led the charge and seized the battery. His reply became historic..

He was born in Peterborough, New Hampshire 1776... In 1814 congress voted him a gold medal and he was made a brig-general for gallantry at Niagra, Chippewa and Fort Erie... He died at Temple, New Hampshire, on July 7, 1851.

Miller was appointed governor of Arkansas Territory by Pres. Monroe and served nearly four years. During that time he traveled more into the interior than all other territorial governors combined.. He organized the militia as a protection against the Indians.. He spent much time among the Indians by whom he was respected. He decided the two peoples could not live in harmony and urged removal of the Indians from Arkansas.. Miller purchased land on Crystal Hill, 12 miles from Little Rock and tried to have the capital located there... 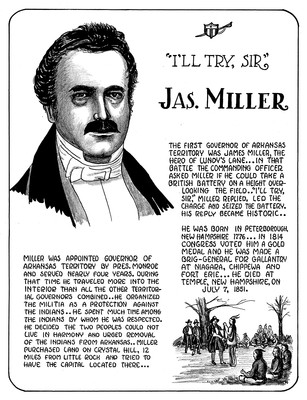