Black and white sketch of Matthew Lyon, including biographical narrative.

Pres. Monroe appointed Lyon Indian agent at Spadra Bluff, Ark... In 1822 when he was 72 years old he made a 3000- mile river trip from Spadra to New Orleans with a boat-load of furs... Lyon opposed Jas. Woodson Bates for congress and the official returns showed him loser by votes.. Lyon declared himself elected.. Went to congress and was denied a hearing.. Died at Spadra 1822.. Elected to congress from Vermont and Kentucky; defeated for congress in Missouri and Arkansas...

"One of the most remarkable men in the United States." 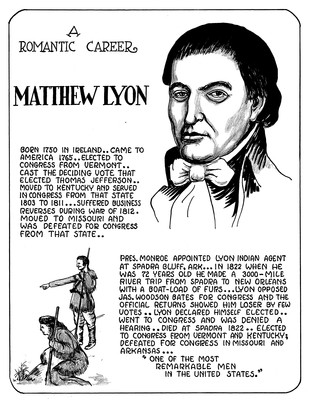