Black and white sketch of Benjamin Johnson, including biographical narrative.

28 years on the bench

Born 1784 in Scott County Kentucky… In 1821 appointed to the territorial bench of Arkansas by Pres. Monroe.. He was re-appointed by Adams and Jackson. When Arkansas became a state Ben Johnson was appointed judge of the federal court for the district of Arkansas and he served until his death in 1849 Judge Johnson's circuit was half of Arkansas.... Courts were 70 or more miles apart and he traveled on horseback... Lawyers accompanied the judge.. Sometimes a dozen of them would sleep in one room of a log house..

Judge Johnson married Matilda Williams of Kentucky. His family lived on a plantation until he purchased the home of Robert Crittenden in 1833.. One of his daughters married A.H. Sevier.. A granddaughter was the wife of Gov. Churchill.. Robert Ward Johnson, congressman and senator, was Ben Johnson's son..... Judge Johnson died Oct. 2, 1849.. 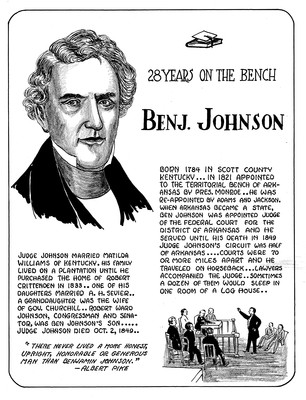