Thomas C. Hindman was born 1828 in Tennessee. He served with a Mississippi regiment in the Mexican War.. Promoted to Lieutenant for gallantry on field when but 18 years old… Studied law and elected to Mississippi legislature… Moved to Helena, Ark., 1854...

Hindman was close friend of Cleburne and both were volunteer nurses in yellow fever epidemic of 1855... Hindman was distinguished by his daring bravery, forcible speech and eloquent language. 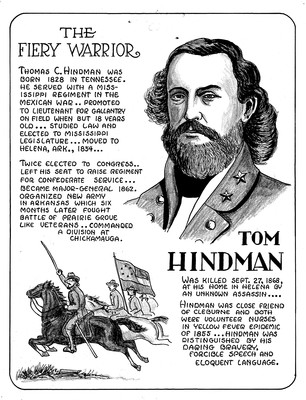