Black and white sketch of Sanford Faulkner, including biographical narrative.

Born 1803 in Georgetown, KY. S.C. Faulkner came to Arkansas in 1829 and located in Chicot County where he became a propserous cotton planter… In 1839 he moved to Little Rock..

Faulkner County is named after him.

Faulkner is given credit for popularizing the tune and words of the Arkansaw Traveler.... In the political campaign of 1840 he made a tour of the state with Sevier, Ashley, Fulton and Yell.... One day at a squatter's mountain cabin, Faulkner acted as a spokesmen for the group and his witty responses are the basis for the story... At a banquet at Little Rock and later at New Orleans Faulkner was called on for the tune and story.

During the Civil War Faulkner was captain of ordnance at the Little Rock Arsenal... Later he went to Texas but returned to Little Rock and engaged in business as a planter... He died August 4, 1874. 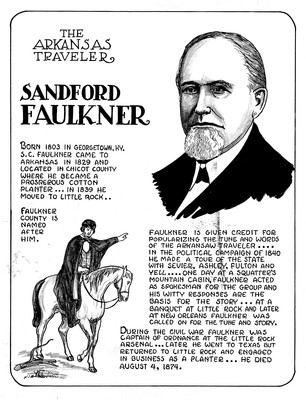