Black and white sketch of James A. Dibrell, including biographical narrative.

Surgeon of the frontier

James A. Dibrell, the "Most noted and skillful surgeon of his day" whose Arkansas career covered 57 years, was born 1817 in Nashville, Tenn… He was educated in the Universities of Nashville and Pennsylvania, graduating from the medical department of the latter in 1839... In 1840 he went to Van Buren, Ark.. Where he stayed till his death in 1897 except for four years in Little Rock during the war.

With some army surgeons at Ft. Smith Dr. Dibrell organized the first medical society in Arkansas, about 1845... In 1886 he was elected president of the Arkansas Medical Society

Dr. Dibrell was twice married: To Ann Eliza Pryor of Tennessee and after her death to her sister Jane Emily... Three of his sons became physicians... He died at Van Buren in 1897 after 57 years as a practicing physician in Arkansas.. 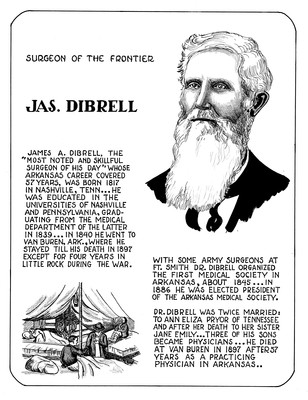