Black and white sketch of Herman Davis, including biographical narrative.

Arkansas' most distinguished son in action

The World War hero whose name was fourth on Gen. Pershing's list of 100 heroes was born and raised in Mississippi County, Ark… His early training as hunter and trapper stood him in good stead in France where he was the company's runner to carry messages. In the Argonne he captured four German machine gunners single-handed and saved an entire American company from annihilation..

On one occasion Davis killed 47 Germans from behind a rock with his unerring marksmanship.. Awarded D.S.C., Croix De Guerre and Medaille Militaire for his heroism on Oct. 10, 1918. Arkansas legislature proclaimed him "Our most distinguished son in action." Davis died Jan. 5, 1923 of tuberculosis contracted during war. A monument to his honor has been erected on the main street of Manila, Ark. 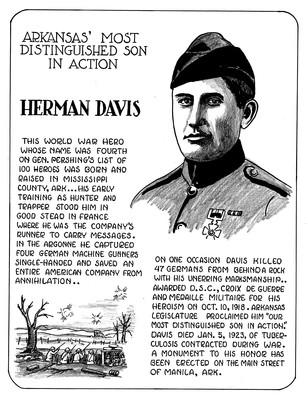