The Stonewall Jackson of the west

Born 1828 in Ireland Patrick Ronayne Cleburne served a year in British Army…. Embarked 1849 for the United States.. Became drug clerk in Cincinnati… Settled in Helena where he worked in drug store and studied law... 1856 admitted to bar... Nursed the sick during yellow fever epidemic of 1855..

Cleburne enlisted in the Yell rifles of Helena and became one of the South's greatest generals... In the hottest of the fight at Shiloh..... Wounded in successful assault at Richmond, KY.... Horse shot under him at Perryville... Captured important position at Chickamauga.... Held the right at Missionary Ridge... One of his greatest achievements was the defense of Ringgold gap.... Cleburne was called "The lionhearted" and his brigade "The terrible".... He was killed while leading the assault at Franklin, Tenn., Nov. 30, 1864. 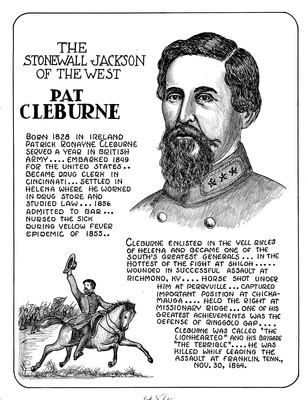