This Civil War diary was kept by Private Thomas Jefferson Jobe while serving with Company B, First Arkansas Mounted Rifles from May 25-August 6, 1861. The diary provides a complete roster of officers and enlisted men in Company B and details camp life during Jobe's first few months of service.

Thomas Jefferson Jobe was a lawyer in Des Arc, Prairie County, Arkansas, before the war. In May 1861, at the age of 28, he enlisted as a private in Co. B., First Arkansas Mounted Rifles in Fort Smith. Company B was also known as the Des Arc Rangers and was under the command of Captain John S. Pearson. It was originally organized as volunteer militia under the 50th Arkansas Regiment. The First Arkansas Mounted Rifles was organized by Thomas J. Churchill, who would later become Governor of Arkansas. Starting as a cavalry unit, the regiment became an infantry unit in 1862. The regiment fought in many major battles including Wilson's Creek, Pea Ridge, Murfreesboro, Richmond, Chickamauga, and Franklin. 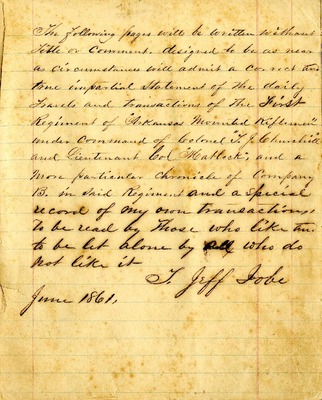