Letter from Sam Ethridge at Camp Pike to his future wife, Nathalia Kauffman, who he calls "Bunny Hunch."

Samuel E. Ethridge was the son of John W. and Victoria Ethridge. His wife, Nathalia, was born in 1899 in Alabama. Before the war, Sam worked as a tinner in Little Rock. Nathalia was an exercise teacher in the public schools. They married on April 29, 1920. 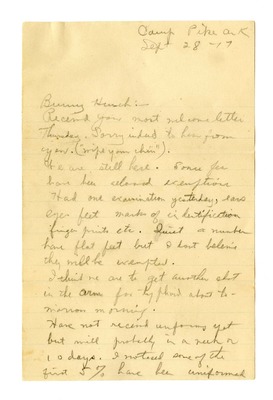