On June 27, 1918, Benjamin Franklin Clark wrote to his sweetheart Flora Hamilton of Enders, Arkansas. He described his life as a soldier during World War I at Camp Pike, near Little Rock, Arkansas. Some of the topics he discusses in the letter include visiting Vilonia to attend the S.S. Convention, receiving mail, planning a trip home to Enders, a thousand newly drafted soldiers arriving at Camp Pike, baked goods and jelly given to him, attending a baseball game in Little Rock between Little Rock and Nashville, going to the Majestic Theater in Little Rock, and Flora working with the Red Cross.

[Image of soldiers loading cannon) U.S. Army
Camp Pike
June 27, 1918
Dear Flora: -
I went to
Vilonia again Saturday
and attended the S.S. Convention
there in the afternoon and it was
real good. On getting back to
Camp Pike, I hurried to the mail
box and found your nice letter
waiting for me. It always does
me so much good to read a
letter from you and from home.
I am still planning to come
home about July 13th or 14th but
I fear I cannot get but 2 days off,
and you know it takes a good part of
that time to make the trip
We are awfully busy now with the
new draft. I saw about a thousand
men unloaded a few minutes ago
but that is getting very common now.
I shall go to the Station tomorrow
night and try to see the Faulkner
County boys who have been taking their
farm furloughs. It's pretty hard on
them to have to leave their crops now
and hit this army.
Oh Say, you did not tell me whether
my army clothes become me or not.
Now honest, do you think I will make
as good a soldier as I do a civilian?
I mean as bad a one.
I hope you had fine luck with your
jelly, for you know I'm very fond of
jelly and might pass through Enders
some time and surprise you.
Edna sent me a cake and glass of
jelly which were awfully good.
A girl at Vilonia fixed me a box of
apples, Cake and things, and in my
hurry when I left, I left it in Homer
Calvin's buggy. I expected to get it in
the mail tuesday but have not gotten
it yet. I hated it awfully bad.
I received a little Khaki U.S. Kit,
containing, razor, comb, needles, and thread,
tooth paste, etc., from there last week,
Think I shall try it in a few minutes.
I went to Little Rock yesterday
afternoon with Reid, and
had a good time. Saw two League
ball games between Little Rock
and Nashville. Then went to
forest Park and back to the
Majestic Theater, catching a
jitney back to Camp at 9:30
P.M. I'm glad you have a Red
Cross Unit there. Am sure you
will do a great deal to relieve
the Soldiers. Every one in Little
Rock is very courteous to the
Soldiers and do all they can
for them. Hope Agnes does
not take Pers's leaving as
hard as she did before.
Tell Hattie and Wincie and
Joe Howdy for me.
Lovingly
Ben.
[Image of Soliders standing in line with pans] LITTLE ROCK, ARK, [postmark]
MAY 28 [postmark]
1 PM [postmark]
1918 [postmark]
PIKE BRANCH [postmark]
U.S. POSTAGE [stamp]
1 CENTS 1 [stamp]
U.S. POSTAGE [stamp]
1 CENTS 1 [stamp]
U.S. POSTAGE [stamp]
1 CENTS 1 [stamp]

Letter (3 pages) and 1 envelope (front and back) 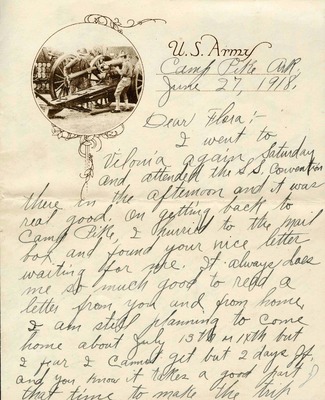