Letter from Benjamin Franklin Clark to Flora Hamilton, 1918 May 12

On May 12, 1918, Benjamin Franklin Clark wrote to his sweetheart Flora Hamilton of Enders, Arkansas. He described his life as a soldier during World War I at Camp Pike, near Little Rock, Arkansas. Some of the topics he discusses in the letter include inspections, dry dusty weather, going to Levy, Arkansas, writing letters for Mother's day, and services at the Y.M.C.A. 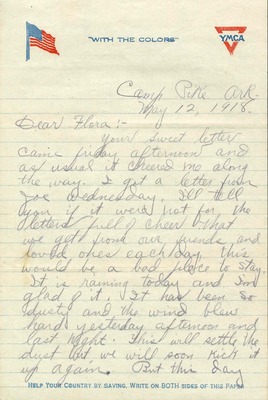