Letter from Benjamin Franklin Clark to Flora Hamilton, 1918 May 6

On May 6, 1918, Benjamin Franklin Clark wrote to his sweetheart Flora Hamilton of Enders, Arkansas. He described his first few months after joining the service during World War I at Camp Pike, near Little Rock, Arkansas. Some of the topics he discusses in the letter include vaccinations, working in the kitchen - "Kitchen Police," the soldiers' schedule at Camp Pike, entertainment, the Y.M.C.A. building, his students in Vilonia, his friends back home, friends from Arkansas State Normal School in Conway (now University of Central Arkansas), the food, swearing, and gambling. He discusses President Wilson's daughter, Margaret, singing at the camp.

Camp Pike Ark.
May 6, 1918
Dear Flora:-
I got the box of
roses friday, and imagine
if you can how glad I was
to get them. They were the first
I have seen since I have been
in camp. I had just written
a letter to my students at Vilonia
and told them that there was no
one here to give me flowers as
they had done. Have been waiting
for a letter with them but have
not received it yet. I cannot feel
at home here yet but think I can
become accustomed to this kind
of life to some extent at least
(over)

I was inoculated the second time
yesterday for typhoid and nearly
all of our company are sick today.
some just fall like they were dead
when they get the shot I have
stood it fine
in full uniform and line up
for "Reveille" (roll call) at 6:18 -
and we have to hustle around for we
have so much lacing to do - We
have breakfast at 6:30, dinner at
12:30 and sup
you, I could tell you some of the
things he said. Saturday night
I heard President Wilson's daughter,
Miss Margaret sing. It was pretty
good but I have heard lots better.
Last
my time to work in the Kitchen
this sunday. We have to work
there about every ten days.
I'm glad Benton Township is doing
so well now buying liberty bonds
and thrift stamps.
am trying to think who you are.
I know your face." He said
"you ought to, I went to school
to your". Then I recognized Jesse
Sublet from Barney.
I have found lots of boys fro
together before. But I do not
consider that any temptation to
me for I have no thoughts
whatever of partaking in such.
I must close and got to work -
There are hardly enoCO. E. 345th Inf.
Camp Pike Ark.
LITTLE ROCK, ARK, [postmark]
MAY 6 [postmark]
6 PM [postmark]
1918 [postmark]
PIKE BRANCH [postmark]
U.S. POSTAGE [stamp]
3 CENTS 3 [stamp] 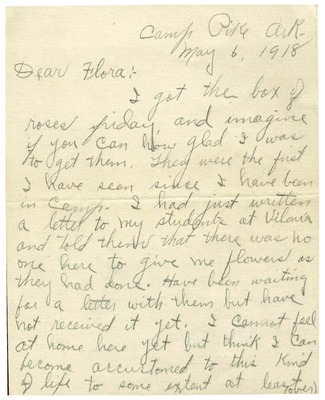