On April 24, 1918, Benjamin Franklin Clark wrote to his sweetheart, Flora Hamilton of Enders, Arkansas. He described his first few days after joining the service during World War I at Camp Pike, near Little Rock, Arkansas. Some of the topics he discusses in the letter include arriving, medical examination, vaccinations, the barracks, receiving his first uniform, the food, swearing, and gambling. He also talked about missing his students at the school, where he taught in Vilonia, Arkansas.

Camp Pike
April 28, 1918.
Dear Flora:- I left Conway
friday night, got here and into
my barracks before twelve but
there was little sleep for me.
The song here is "I had
A good home, but I had
to leave it", and "We're
in the Army now."
We were examined this morning
and vaccinated for Small Pox
and inoculated for Typhoid
and I am rather sore from
the latter. The first of course
will not take. I have just
finished dressing in my
first uniform, gift of Uncle
Sam and won in his honor.
I see from this window some
other men writing, some talking,
some marching, some just arriving,
and some "Shooting Craps,"
some losing and some winning

money, some playing ball,
and some sight-seeing.
This is the regular days
program. We have a very
good equipment and a
pleasant place to sleep and
plenty of well coo
real Sunday dinner today
with ice cream and cake
for dessert.
Flora, when I left Vilonia
School thursday, I left my
students crying as if their
hearts would break, and they<
clean up the grounds but
my time will come soon
enough.
This swearing, card playing
and crap shooting may go on
here forever but I for one
will not take part in it. F80
U.S. POSTAGE [stamp]
3 CENTS 3 [stamp]
LITTLE ROCK [postmark]
APR 28 [postmark]
6 PM [postmark]
1918 [postmark]
PIKE BRANCH [postmark] 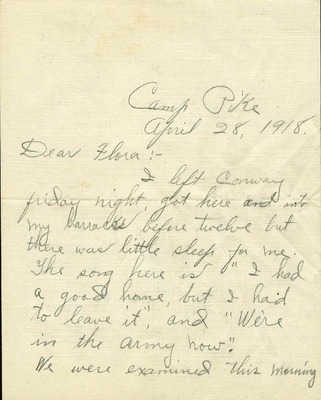