The letter from Eugene H. Garland, Camp Pike, Co. 5, 346th Infantry, to his sister, Ollie Garland, 800 Summit Ave, Little Rock, Arkansas, is on Y.M.C.A. stationary and is dated September 27, 1917. The envelope is postmarked September 28, 1917. The letter details Eugene's experiences at Camp Pike, since he was inducted into the Army on September 18, 1917. He describes how he is still in quarantine and can rarely leave his barracks. After the completion of his examination, Eugene hopes to visit his sister Ollie in Little Rock on a Sunday soon. Since he has not received his uniform yet, Eugene requests clothes from home and comments on filthy condition of his current clothes.

Eugene Howard Garland of Alum, Arkansas, was inducted into the Army at the age of 24 7/12 years in Benton, Arkansas, on September 18, 1917. He served in Co. E, 346th Infantry from September 18, 1917, to November 14, 1917; then in Co. G, 39th National Guard Division (Co. D 153rd Infantry) until May 18, 1818; and then in Co. D, 7th Infantry until his death at the Second Battle of Marne in France on July 15, 1918. Before serving overseas (France) from June 7, 1918 to July 15, 1918, Eugene Garland was stationed at Camp Pike, Arkansas; Camp Beauregard, Louisiana; and Camp Merritt, New Jersey. Eugene was born in Dardanelle, Arkansas, in 1893 to James T. Garland. The day he wrote this letter, his brother, Simon Turner Garland was sent his Draft Induction Notice, and soon joined him at Camp Pike and Camp Beauregard. This material is part of the Garland Family Papers, 1914-1919, (SMC.138.04), which is mostly comprised of letters from Simon Garland and Eugene Garland to their sisters, Ollie C. Garland and Laura A. Garland during World War I.

is not very hard. We
drill every day and in
the evening we take a hike.
The hike is not very long
and I rather like it. I
like this place very well
if it were not for being tied
down this way. The officers
say we will have to go
to France in Feb., but will
not have to fight any till
late next year.
I have got so I can
not hear very well and
possibly I will fall down
on the examination
WAR WORK COUNCIL
_______
ARMY AND NAVY
YOUNG MEN'S CHRISTIAN ASSOCIATION
_______
"WITH THE COLORS"
3
_____________1917

Do you know what has
become of P.B.?
I think I shall go
home as soon as I can
after the quarantine. The
quarantine will last 10
days. I think Judge likes
this place fine. Vander
Whitehead is pretty home-sick
We are in barracks
no. 71 I will try to come
to L.R. [Little Rock] some Sunday
I don't know where
you could find me out
here for I don't know
anything about the place [Type text]
WAR WORK COUNCIL
_______
ARMY AND NAVY
YOUNG MEN'S CHRISTIAN ASSOCIATION
_______
"WITH THE COLORS"
4
_____________1917

myself. We were not
allowed to leave the
building except to go
to and from the drill
ground till two or three
days ago, when we began
taking our hikes. I will
be over in LR [Little Rock] soon
possibly next Sunday
if we are out from
under the quarantine
then. My clothes are
awfully dirty and I cant
go anywhere till I get
some more, except, if
I should fail on the exam [Type text]
WAR WORK COUNCIL
_______
ARMY AND NAVY
YOUNG MEN'S CHRISTIAN ASSOCIATION
_______
"WITH THE COLORS"
#5
_____________1917 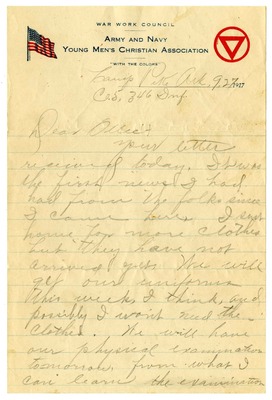