This postcard Draft Induction Notice ordered Simon Turner Garland of Alum, Ark., to report for military duty to the War Department Local Board for Saline Co. in Benton, Arkansas, on October 2, 1917. A postmark on the card reads Benton, Ark., Sept. 27, 11 a.m, 1917. The postcard instructs Simon Tuner Garland that he will be transported to the Army mobilization camp at Camp Pike, Arkansas and specifies what he should bring with him.

Simon Turner Garland (1895-1978) of Alum, Saline County, Arkansas, was inducted into the Army at the age of 22 3/12 years old in Benton, Arkansas, on October 2, 1917. After reporting to Benton, he was transported to Camp Pike for mobilization. Simonâ€™s brother, Eugene H. Garland (born 1893 at Dardanelle, Arkansas) was already at Camp Pike when Simon arrived, and later died at the Second Battle of Marne in France on July 15, 1918. Simon Garland served in Co. K, 346 Infantry until Nov. 19, 2017, then in the Auxiliary Rmt. Department #314 at Camp Beauregard, Louisiana, until he was discharged on March 7, 1919. Simon never served overseas during World War I. Simon was born in Russellville, Arkansas, in 1895 to James T. Garland. Simon married Murriel Ella Nethercutt and had a child. Simon Turner Garland passed away on 1978 in Little Rock, Arkansas. This material is part of the Garland Family Papers, 1914-1919, (SMC.138.04), which is mostly comprised of letters from Simon Garland and Eugene Garland to their sisters, Ollie C. Garland and Laura A. Garland during World War I.

Although World War I began in 1914, the United States was not a formal participant in World War I until April 6, 1917. The Selective Service Act or Selective Draft Act (Pub.L. 65-12, 40 Stat. 76, enacted May 18, 1917) authorized the United States federal government to raise a national army for the American entry into World War I through conscription. Draft Induction Notices, such as the one featured here, were sent from the War Department Local Board to male civilians to let them know they were selected for compulsory military service, and when and where to report.
Camp Pike, known as Camp Joseph T. Robinson since 1937, is located in present day North Little Rock, Arkansas. Named in honor of Brigadier General Zebulon M. Pike, Camp Pike served as a home and training camp for the 87th Division (National Army) and then as a replacement training facility after the division deployed to France during World War I. Construction totaling about $13,000,000 on the camp began in June 1917 and was substantially complete by November 1917. The post was a demobilization station and home for the U.S. Third Infantry Division as World War I came to an end. Between World War I and World War II, the camp served as the headquarters of the Arkansas National Guard. During World War II, Camp Robinson became a replacement training center, primarily for basic training and medics, and a German prisoner of war facility. As of 2014, Camp Joseph T. Robinson serves as a 33,000-acre training facility for the Army National Guard and is the headquarters for the Arkansas National Guard.

I hereby make application for permission to eat and to spend the night
at home during the period I will be under the orders of the Local Board
prior to entrainment. During this time a message can reach me at _ _ _ _ _ _
_ _ _ _ _ _ _ _ _ _ _ _ _ or telephone at
No. _ _ _ _ _ _ _ _ _ _ _ _ I will at no time be
More than an hour's journey from the office of the Local Board. I do not
Desire food or lodging furnished me by the Local Board during this period.
Fill out and send to Local Board
If you desire this permission. _ _ _ _ _ _ _ _ _ _ _ _ _ _
3-4716
Form No. 164 C.
By direction of the Secretary of War, you are hereby ordered to report to the office of this Local Board
at 4 P.M. on the 2nd day of Oct, 1917 for military
duty and for transportation to the Army mobilization camp at Camp Pike, Ark.
From the date herein specified for you to report, you will be in the military service of the United States and subject
to military law. Failure to report or unpunctuality are grave military offenses punishable by court-martial. Willful
failure to report with intention to evade military service constitutes desertion which is a capital offense in time of war.
Present yourself at the precise hour specified in order that you may not begin your military record in the service
of your country with a delinquency.
You will be held under the orders of this board until the hour of departure of your train. During this period the
Local Board will furnish you food and lodging. If you live within one hourï¿½s travel of the office of the Local Board,
you may obtain permission to sleep and eat at home, but only if you fill out and forward to the office of the Local
Board at once the printed application for this permission at the end of this sheet.
You will not be permitted to take with you on the train anything but hand baggage. You do not need bedding or
changes of clothing except as specified below. You may take with you only the following articles: Soap; shaving
accessories; comb and brush; toothbrush and tooth powder; towels; underclothing and sock; and if you desire,
changes of collars and shirts, but you will have no use for these after arrival at the mobilization camp.
Since you will not be permitted to retain any trunks after your arrival at the railroad station, the articles listed
above should be brought in a hand bundle.
If you desire to do so, you may return the civilian clothes you are wearing when you arrive at the mobilization
camp to your home by express or otherwise, but if you desire to make no such arrangement, it will be better to appear
in civilian clothes that you do not care to keep.
9-27-17 LOCAL BOARD FOR _ _ _ _ _ _ _ _ _ _ _
(date) D.C. Cox
(Chairman.)
L. R. White
(Secretary.) 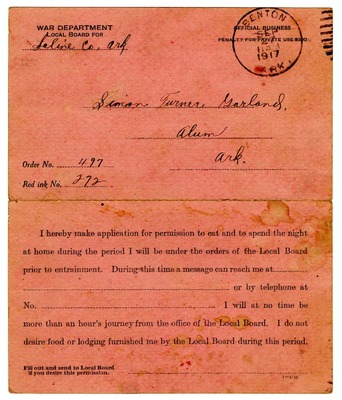