Camp Pike, known as Camp Joseph T. Robinson since 1937, is located in present day North Little Rock, Arkansas. Named in honor of Brigadier General Zebulon M. Pike, Camp Pike served as a home and training camp for the 87th Division (National Army) and then as a replacement training facility after the division deployed to France during World War I. Construction totaling about $13,000,000 on the camp began in June 1917 and was substantially complete by November 1917. The post was a demobilization station and home for the U.S. Third Infantry Division as World War I came to an end. Between World War I and World War II, the camp served as the headquarters of the Arkansas National Guard. During World War II, Camp Robinson became a replacement training center, primarily for basic training and medics, and a German prisoner of war facility. As of 2014, Camp Joseph T. Robinson serves as a 33,000-acre training facility for the Army National Guard and is the headquarters for the Arkansas National Guard.
Clarence Walter Ferguson (1894-1950) was a farmer from near Nashville, Howard County, Arkansas. He was a cook with Company B, 1st Regiment at Camp Pike during World War I. Clarence W. Ferguson and his wife, Nannye Nell McCrary Ferguson, had one son, John L. Ferguson, who was the director and State Historian at the Arkansas State Archives from 1960 to 2005. 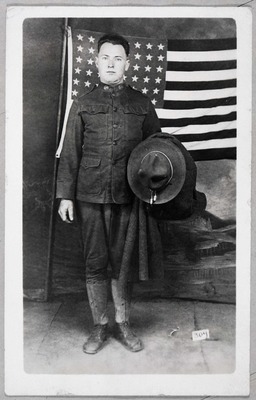