Photograph of tables set for Thanksgiving Dinner at Camp Pike in 1918. The mess hall is decorated with streamers and plants for the celebration. On the tables are what appear to be cut-up turkeys, rolls, bananas, apples, mashed potatoes, dressing, olives, celery, cakes, bowls, plates, and cups. In the background of the photograph are six unidentified soldiers and three unidentified women in civilian clothing sitting next to a piano. A photograph of General John Pershing is on the back wall of the mess hall. 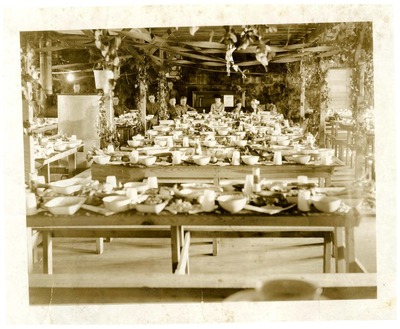