This is Willie K. Hocker's narrative about the origin of Arkansas's state flag. The first four pages are handwritten on Pine Bluff letterhead by Hocker, designer of the flag, but the last page is typed.

In 1912, the United States Navy commissioned the USS Arkansas battleship, for which the Pine Bluff Chapter of the Daughters of the American Revolution wanted to present a stand of colors. Surprised to find that there was no state flag for Arkansas, the Pine Bluff Chapter and the Arkansas Secretary of State office organized a contest for Arkansans to submit designs for the new flag. The Secretary of State office received 65 entries, of which Willie K. Hocker's design was the winner.

A History of the Official Flag of Arkansas
Early in 1912, the Pine Bluff Chapter
D.A.R., by a unanimous vote decided to present the
new battleship Arkansas with a "Stand of Colors" con-
sisting of a United States flag, a Naval Battalion
flag and an Arkansas state flag.
To Mrs. C.W. Pettigrew belongs the honor of
of[sic] having originated this plan of flag giving
The acting regent of the chapter, Mrs. W.L.
Dewoody appointed a flag committee consisting of Mrs. C.W.
Pettigrew, Mrs. W.A. Taggart and Mrs. Frank Tom-
linson. They wrote to the secretary of state asking
for a copy of the official state flag. He replied:
"Arkansas has no flag."
The Pine Bluff Chapter D.A.R. then took
the initiative in a movement to have the next Gen-
eral Assembly adopt a state flag. The flag committee
caused to be published in the leading papers of the state
an article asking artists and designers everywhere, particularly those
of the state of Arkansas to submit designs appropriate
for a state flag, to a committee of selection, consisting
of not less than seven competent persons who would
from the submitted designs select the one most ap-
propriate for a state flag, should an appropriate design
be found among those submitted. The designs were
to bear no mark of identification, but be accompanied
by a type of written explanation of the design, and by a
sealed unmarked envelope containing another explana-
tion, and the name and address of the designer.
Mr. Earl W. Hodges, Secretary of State consented to be-
come the custodian of the submitted designs and to name
the committee of selection.
The first committee met in the parlor of Hotel
Marion, Little Rock, on Saturday, January 1913. It
consisted of the following named persons: - Maj. C.R. Breck-
enridge, chairman; Prof. J.J. Doyne, secretary; Mr. G.B.
Rose, Gen. B.G. Green, Col. V.Y. Cook, Dr. Junius Jordan,
Mrs. Julia McAlmont Noel, and Mrs. Jo Frauenthal. They
made no selection, but recommended that a committee be
appointed to search the records of Arkansas to see if there
ever had existed a regularly adopted state flag. This com-
mittee failed to find any such record.
The second committee consisting of Mr. Earl. W. Hodg-
es, chairman; Gen. B.G. Green, Dr. Junius Jordan, Mr. G.B.
Rose, Mrs. Julie McAlmont Noel, Mrs. Jo Frauenthal, Mrs.
Ellsworth and Miss Julia Warner, met in the office of the
secretary of state and from the sixty-five submitted
designs unanimously chose the design made by Miss
Willie K. Hocker of Pine Bluff, a member of the D.A.R.
chapter that had taken the initiative in the flag adopt-
ion measure.
On Saturday, February 14, 1913, Senator Phillips
introduced a joing resolution for have the selected de
sign adopted as Arkansas'[sic] official flag. The measure
carried, and the following Tuesday, February 18, the
House passed the resolution, and Arkansas had an
official flag, regularly adopted by both the houses of the
General Assembly.
The design is a rectangular field of red, on
which is placed a large white diamond, bordered by
a wide band of blue, - national colors. Across the di-
amond is the word "Arkansas," (placed there by request
of the committee) and three blue stars, one above, two
below the word. On the blue band are place[sic] twenty
five white stars.
Explanation of Design
This design has in it much of Arkansas'[sic] history
as given below:
Arkansas is one of the United States, therefore the
national colors are used.
The three blue stars typify the three nations,
Spain, France and the United States to whom Ark-
ansas has successively belonged. Their number, three,
indicates that Arkansas was the third state carved from
the Louisiana Purchase Territory, this purchase is the
greatest act yet performed by the United States. The
three stars indicate the year (1803) when Arkan-
sas became the property of the United States.
The twenty five white stars show that Arkansas
was the twenty fifth state in the order of admission
to the Union.
The state came into the Union paired with another
state, (Michigan). This is shown by the pair of stars
on the lower angle of the blue board.
Arkansas contains the only known diamond mine
within the possessions of the United States therefore-
Arkansas should be known as "The Diamond State."
Signed -
(Miss) Willie K. Hocker,
Designer of the State Flag of Arkansas 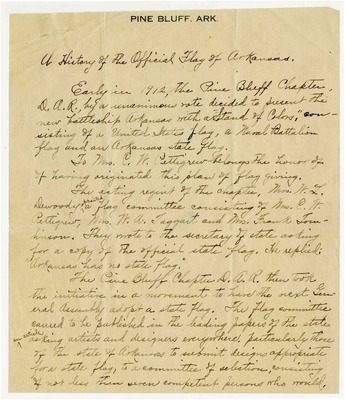