This is a handwritten diary with the words, "My Stretch in the Service" on the front cover. The diary covers August 1942 to November 1943. This shows the opening title page and first page of the diary.

The youngest daughter of Howard and Eva Massingill Reed, Marion Reed was born on December 22, 1919, in Heber Springs, Arkansas. She was inducted in the Women's Army Auxiliary Corps (WAAC) on August 25, 1942. After basic training, she became a cook and baker (C'B). She was accepted for Officer Training in February of 1943. She went as a second lieutenant to Lafayette then Shreveport, Louisiana, to recruit for the Women's Army Auxiliary Corps. In July 1943, the Army changed the name to the Women's Army Corps (WAC). As a second lieutenant in the WAC she was transferred to Camp Hood, Texas, and became a mess and supply officer. Reed was then transferred to Europe, and served in England through V-J Day. In October of 1945, she was reassigned to Frankfurt, Germany, in personnel, finding civilian jobs for those who wanted to stay overseas at the end of World War II. Marion Reed left Europe in May of 1946 for the United States and Little Rock. She was discharged from the United States Army as an officer in 1946. She married Robert Guy Biddle in 1947. Marion Reed Biddle died April 20, 1997. The diary covers her induction, training, and a portion of her time as a recruiter in Louisiana.

Marion Reed
A800530
11 Co 3rd Reb - 27 Co. - 3rd Reg.
WAAc - WAC
8-25-42
Reported to induction center
took mental exam which I
landed out to be above
intelligent. They asked me why
in hell hadn't tried for
officer training. Reported for
physical at 7 o'clock - 11
of us - 9 passed. Blood
pressure a little high (136)
when was 114 a week ago,
got by rest O.K.
8-26-42
Reported to induction center
read "articles of war" to the
other gals. Was inducted
at 2:30 jinto the W.A.A.C.
or Wachs so I now belong
to Uncle Sam. Told them it
was the first time I'd ever
said I do - thought you
only said that when you
got married.
9-9-42
Received orders to report
at Des Monies Sept 24st, 42.
Have quit work and am
at home - have been
helping at the Recruiting
Station.
9-19-42
Had date with Lt. Long
Recruiting office for the
Wacks. First date he'd
ever had with a Wach -
He really knows how to (continued on next page) 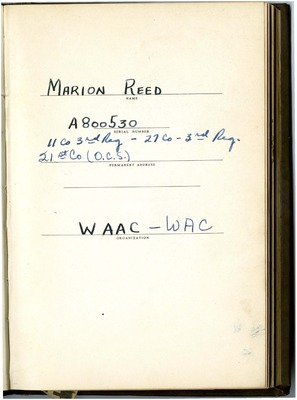