These are handwritten minutes taken at the first Arkansas State Archives meeting.

Minutes of the Arkansas State Archives
Meeting of July 6, 1905
In accordance with the provisions
of the act of April 27, 1905, James K.
Jones, president of the Arkansas
Historical association, appointed the
following members of the
Arkansas History Commision:
Col. Benj. S. Johnson, Little Rock;
Hon. R.J. Wilson, Fayetteville;
Hon. C.D. Greaves, Hot Springs;
Hon. W.H. Langford, Pine Bluff;
and Prof. J.H. Reynolds, Fayetteville.
Col. Johnson on June 30
issued a call for the commission
to meet in his office at Little
Rock at 10 A.M. July 6, 1905.
At the time appointed the commission
met and organized. All of the members
were present except Hon. R.J. Wilson
of Fayetteville who was detained
on account of legal business.
The commission organized by
electing Col. Johnson chairman
and Professor Reynolds secretary.
The law creating the commission
was read and its provisions discussed.
The scope and methods of
the work of the commission were
discussed and plans adopted.
The secretary was instructed to
have the necessary stationary
prepared and to prepare and
to have printed two circulars
one containing the law and
the other a general circular
giving the purpose and the plans
of the Commission and an outline
of their proposed report.
The secretary read the proposed
outline of the work of the commission
which after discussion was adopted.
The work was then apportioned among
the members as is
shown in Circular 1 given below.
It was decided that each member
should have his matter ready for
the printer by August 1, 1906 and that
the first volume of the publications
should be ready for distribution
Jan. 1, 1907. It was further decided that
the chairman might appoint associate
members of the commission
upon the nomination of any
member, and that their
names should appear in the
printed report.
The commission then adjourned
subject to the call of the chairman.
Benj. S. Johnson, Chairman
J.H. Reynolds, Secretary

This is the very first record of our agency created 110 years ago. - April Goff 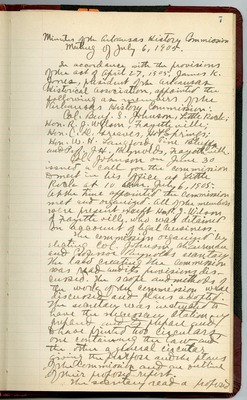