Six-page contract between the Arkansas State Capitol Commission and the construction firm Caldwell and Drake. Dated August 14, 1903, the contract is signed by George Caldwell (representing Caldwell and Drake), the five Arkansas State Capitol Commissioners. Capitol architect, George Mann, and Secretary of the Capitol Commission, Lehman Kay, also signed the contract as witnesses. It is printed on carbon paper with a smaller, green front cover and a blue back cover. There are markings on each page that identify edits, additions, and sections of the contract. There is also writing on the back cover that labels it.
Clauses in the contract state that the building was to be constructed using Batesville marble and Arkansas granite; construction was to be completed by December 23, 1905; and the cost of construction was to be $947,846. The Capitol was not completed until 1915 at a cost of $2.2 million dollars and, because of difficulty cutting the marble out of the quarry in Batesville, additional stone from Indiana and Alabama were needed to complete construction. A scandal involving Caldwell and Drake bribing Arkansas legislators in 1905 and repeated concerns about the firm's quality of construction of the building damaged its reputation. The Arkansas General Assembly dismissed Caldwell and Drake as contractors (as well as architect George Mann) in 1909.

Building contracts are interesting because they detail materials used in the building's construction, the time frame of construction, and the cost of construction. These things provide evidence of what a community values or an image it wants to portray. - Darren Bell 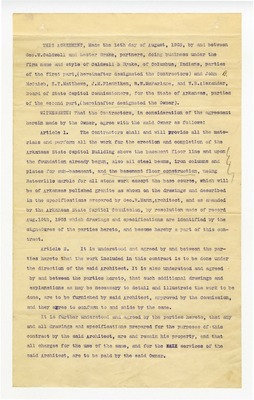